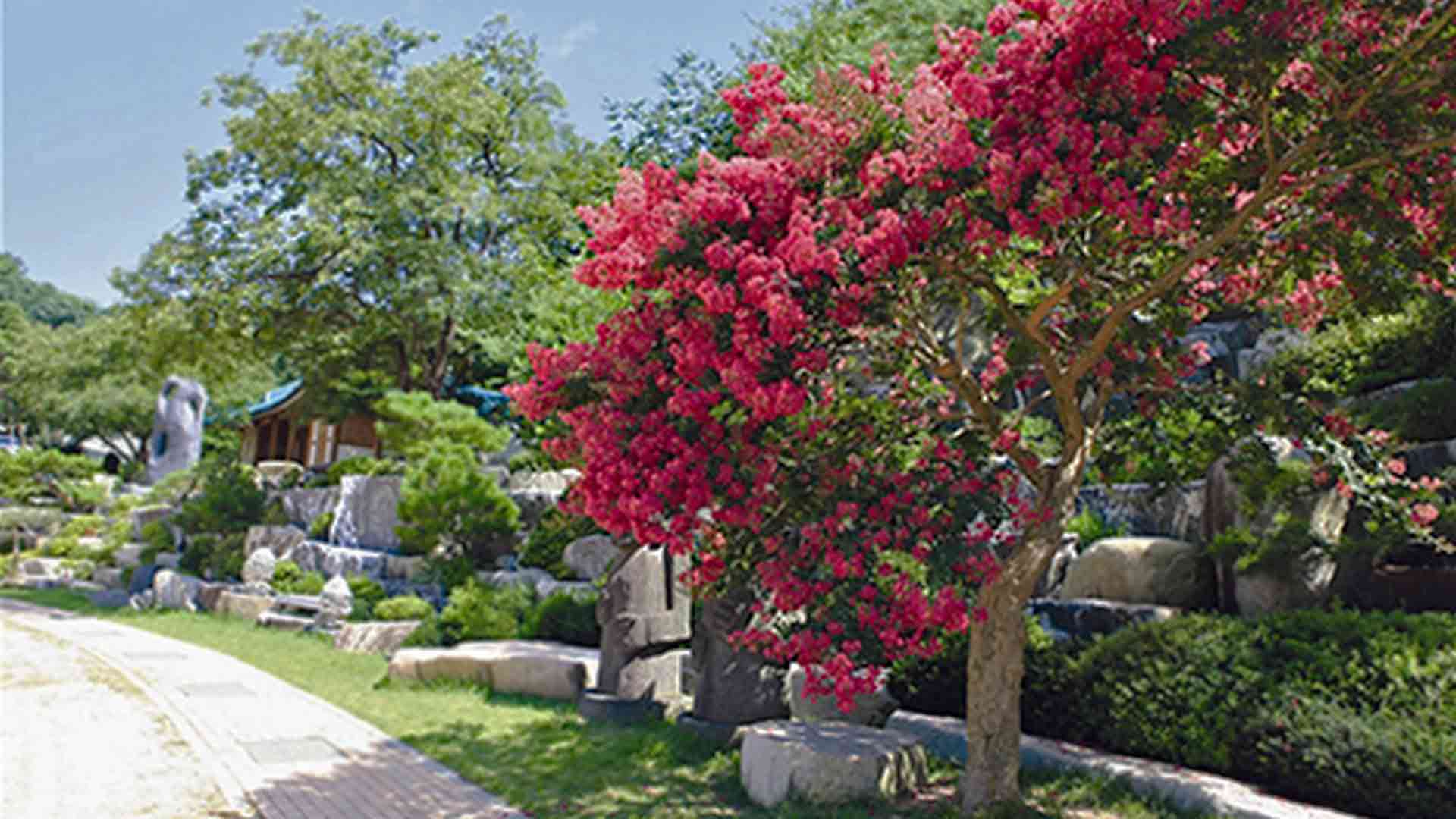 The crape myrtle trees in Wolmyeongdong used to be located in front of a tomb. The tomb was moved to the foot of the mountain on the way into the village from a wide road near Boryeong Dam (see note below).

Note: The government designated Boryeong Dam as a place for floods.

The Story Behind the Crape Myrtle Trees

One day Pastor Jung Myung Seok asked one of the workers to buy all the trees in the construction area around Boryeong Dam. When the worker went there, he found two huge crape myrtles beside a tomb in the mountains. They were both about 200 years old.

Since the crape myrtles were growing between rocks, they thought it was going to be difficult to excavate the trees.

Many people before had given up on taking the trees and left empty handed.

Trees such as these would be worth about $10,000 per tree. Nevertheless because the rocks around the trees were connected to the rock below the tree’s roots, it seemed impossible to dig out the trees. Everyone thought that it was impossible. So they turned their backs on the idea, saying that it was like a pie in the sky.

The trees were beautiful, but they were so hard to dig out because of the rocks. When the Wolmyeongdong workers reported about the situation, Pastor Jung said, “Don’t give up. Try to break the rocks and dig out the trees.” After saying that, he made a contract with the owner of the trees. He told the owner that it would be difficult to dig out the trees because of the environment. So the owner agreed to sell each tree for $350, $700 total for both trees.

The Lord spoke through Pastor Jung so that someone would go to the construction area at Boryeong Dam and find these two grand masterpiece trees. The owner of the two trees thought that it was a waste for them to be around a tomb. But he did not attempt to dig them out since he thought the trees roots were tangled within the rocks. Seeing with your eyes is not enough, you have to take action and then see.

The Lord already knew beforehand and made us take action to bring the trees. When the trees arrived in Wolmyeongdong after these complications, Pastor Jung received an inspiration, “These trees are trees that God was holding onto because He wanted to send them to Wolmyeongdong.”

Pastor Jung gave glory to God and rejoiced with everyone. With perfect timing Pastor Jung’s mother gave him the $1000 that she had saved up with his father saying, “I also want to plant a tree.”

With the money Pastor Jung received from his mother he planted the crape myrtle trees. He bought the two crape myrtle trees and planted one besides the traditional Korean blue-tiled roof house. He set the other one near the Only the Lord God Rock.