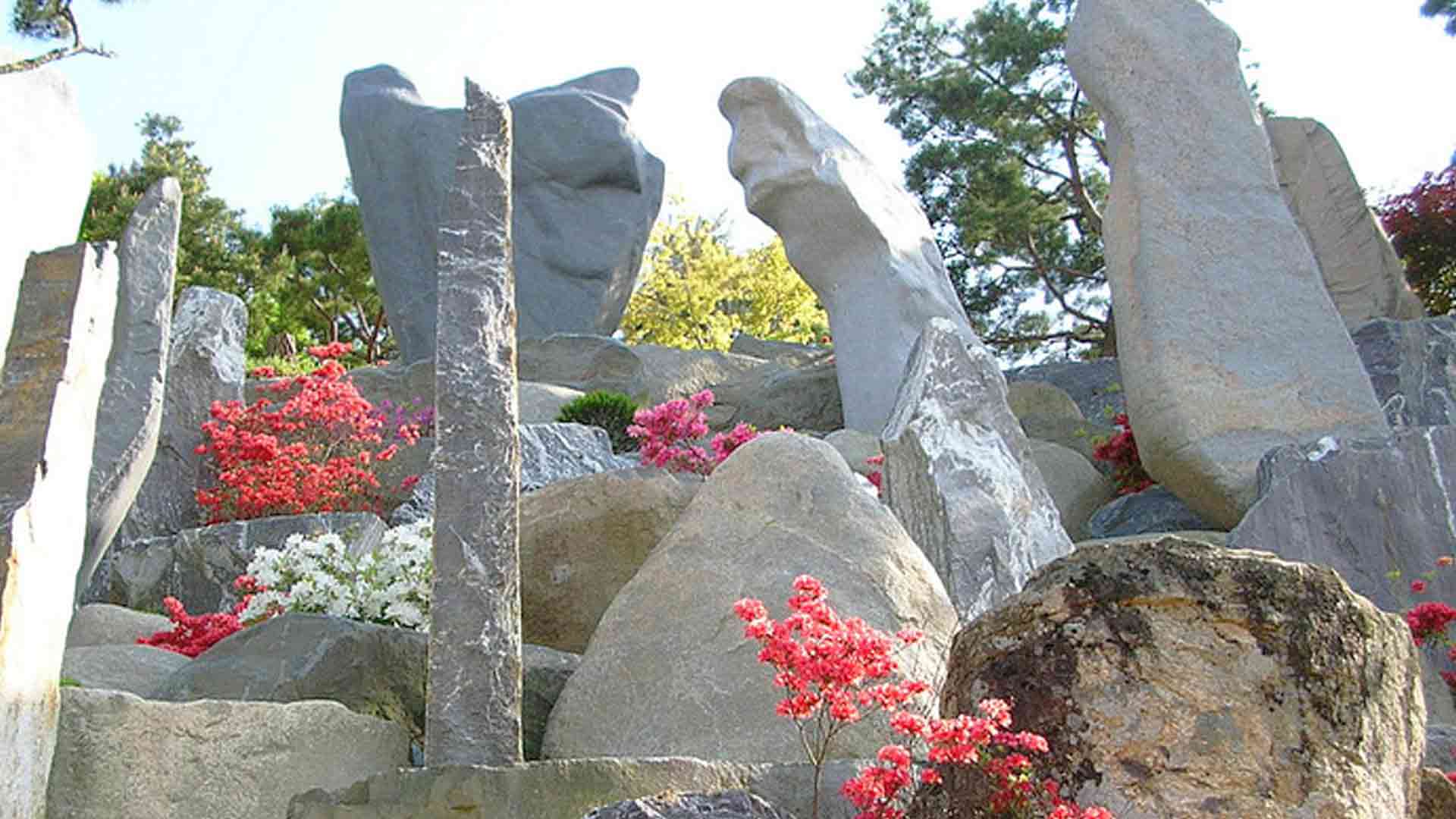 The God Rock was purchased and brought in to Wolmyeongdong together with the Natural Temple Signboad Rock. When we placed the God Rock in the Front Mountain Rock Landscape, we used a 100-ton crane to do it. At that time, we worked together with about 200 other people while being drenched in rain until 2:00 am.

Although the boulder was small, we wanted to put the rock at the peak of the rock landscape. So it was a difficult task. The rock was also bent a bit towards the front so most of the rock’s center of gravity was towards its front side. We had a difficult time erecting it because whenever we set up upright, it would fall forward. As a result, it took us hours to set it upright in a way it would not fall because the method we had to use to erect the rock wasn’t as straightforward as we thought.

We also had to consider the angle the rock had to face. Since the God Rock is an image rock, if the angle the rock is facing is off even by a little, then its image would be hard to see from the sports field. In the end, we worked on it until the Holy Son was satisfied.

The Meaning Behind the God Rock

The God Rock has the image of God searching for righteous people while looking down upon the Earth. That is why Pastor Jung Myung Seok named this rock the God Rock. Under this rock, we also set up the Righteous Man Rock, which is looking up at the God Rock.

This rock was more difficult to find, purchase, and erect than the other rocks we put up at that time. It was a miracle that we were able to purchase and bring this rock to Wolmyeongdong. When we were trying to lift this rock with a crane, part of the rock that was supposed to be embedded into the ground broke. Since it was so difficult to place the rock, other people might have thought, “This is strange. Maybe it’s not the Will. Maybe God doesn’t like this rock,” and they wouldn’t have erected the rock.

However, Pastor Jung tried until the end without giving up because God taught him that human beings must do their responsibility. When we finished, he said, “I was so glad that I was able to place the rock at the top of the Ambition Masterpiece after doing my responsibility until the end. I realized that this rock required us to do more responsibility than the other rocks because this rock symbolizes God.”

It is yin and tang, night and day, man and woman, the earth and the sky. Just as two act as one, God and humans each have a responsibility they need to do. This is one of laws God has created. Freedom comes to a person when he has done all his responsibility. God gave us responsibility so that we achieve freedom.

How We Bought the God Rock

On the day we purchased this rock, Pastor Jung told an elder, “Today, let’s buy a rock that is different. The rock should have distinct features and should look like a bit like a divine being and a bit like a human, or at least, it should have an image even though it may be an abstract one.”

The elder told him that he was already looking for a rock with the image of a human even though no one told him to look before. When he went to the rock store though, he couldn’t find anything.

So Pastor Jung said, “Regardless, let’s try again and look a bit more meticulously. Talk to the owner and ask to see if he is hiding any rocks as well.”

Later in the afternoon, the elder brought back this rock. When Pastor Jung saw it, it looked like it had the image of an adult who was looking down at a younger person. It looked like a natural rock, but someone had actually manipulated it. When he asked the elder who bought the rock about it, he said, “Originally, this rock naturally looked like how it is now, but the owner polished it a little bit more to make it look better.” The owner had polished the rock to put in his own backyard because he liked how the image of this rock looked.

When the elder told the previous owner, “Our Chairman told me that there would be a rock like this. That’s why I came today,” the owner gave the rock to him for a very low price. He discounted the price so it costed the same as a regular rock. He felt like he polished the rock just for Wolmyeongdong. So that’s the story of how the elder was able to bring the God Rock to Wolmyeongdong.

During the time when King Solomon reigned, God prepared trees in Lebanon so that people could cut and bring them for the temple’s construction. Likewise, Pastor Jung realized that God prepared the materials for the construction of the Natural Temple at Boryeong Geomun Yaeseok (name of the rock selling company) and made us bring them to Wolmyeongdong.

After that, we never found any natural rocks like the God Rock. If we had found other similar rocks, then we would have bought them and put them up as well.

When the previous owner dug out this rock and looked at it, he thought it looked like a divine being. So he polished it until it was smooth.

“When I look at it, it reminds me of God who is looking down from Heaven and watching the lives of this world. It is a rock that reminds me of the poem Life of the Righteous.” – Pastor Jung Myung Seok