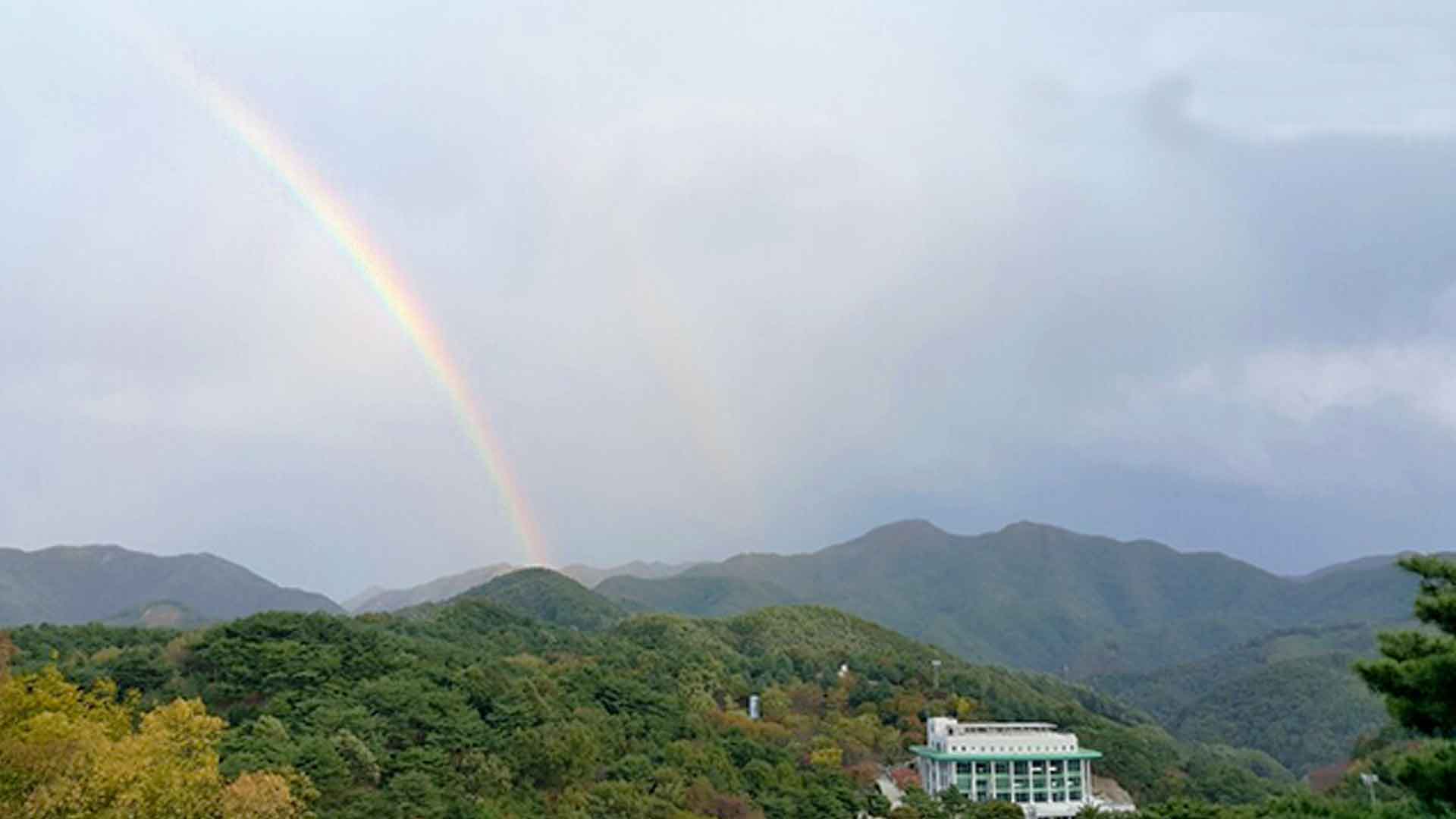 The Wonder of the World Rises in Wolmyeongdong

“The creations that people make cannot be compared to the creations that God has made.” This is an excerpt from a sermon Pastor Jung Myeong Seok delivered. After the rain falls, the rainbow blossoms behind the mountains in Wolmyeongdong.  The palette full of the colours from Heaven is very wondrous. Due to its ‘wondrousness,’ when we see a rainbow in the sky, we feel fresh and joyful, and we gain hope.

Pastor Jung Myeong Seok once said, “There must be mystery and novelty for something to be wondrous.” The rainbow has appeared in many legends because it is mysterious and novel. Rainbows appear to be more wondrous than anything in the world. In stories and legends, people thought that rainbows were bridges made by the gods. They connected the heavens and the earth. Other people used to think that treasure was buried where the rainbow ended. The French spoke of finding huge pearls, the Greeks finding gold keys, the Irish gold watches, and the Norwegians gold jars. In this way, the rainbow has become a place where people can meet gods and also find treasures. It gives hope and dreams to many people. This might be why people feel good after seeing a rainbow.

On October 10th, a double-rainbow appeared over the Holy Son’s House of Love  in Wolmyeongdong and over an entire mountain.

The Rainbows from the Holy Trinity

Such a mysterious and novel rainbow formed a huge circle as it rose from the Holy Son’s House of Love. It was a double-rainbow consisting of a ‘brighter arch’ which was particularly bright and fair, and a ‘fainter arch’ which was dim and blurry.

The Wednesday message that Pastor Jung Myeong Seok gave was entitled, “Realize the wondrousness and love while rejoicing and being thankful.” In the message, he said, “If God does not give a reason and a story to rejoice and celebrate, there will be no happiness even if you do celebrate. You must love and give glory to the Holy Trinity in a way that will make Them happy. Then They will make you happy when They respond to you.” There were many events in Wolmyeongdong on October 10th, so many Christian Gospel Mission (CGM) members visited Wolmyeongdong. They gave glory before Heaven and made stories together with Heaven. This mysterious and novel rainbow was the the Holy Trinity’s response to all the glory and love They received.

▲ On August 11th, a rainbow appears above the Holy Son’s House of Love in Wolmyeongdong during CGM’s summer retreat.

Since the 1990s, the number of rainbows appearing have been drastically decreasing. People say that the reason behind this is air pollution. However, the Holy Trinity has allowed us to see many different rainbows in Wolmyeongdong this year. There is a German proverb saying, “If you see a rainbow, good things will happen to you for 40 years.”

We hope that, for forty years and beyond, only good things will happen to those who saw the rainbows. We hope that Wolmyeongdong too will have good fortune for accommodating many rainbows.