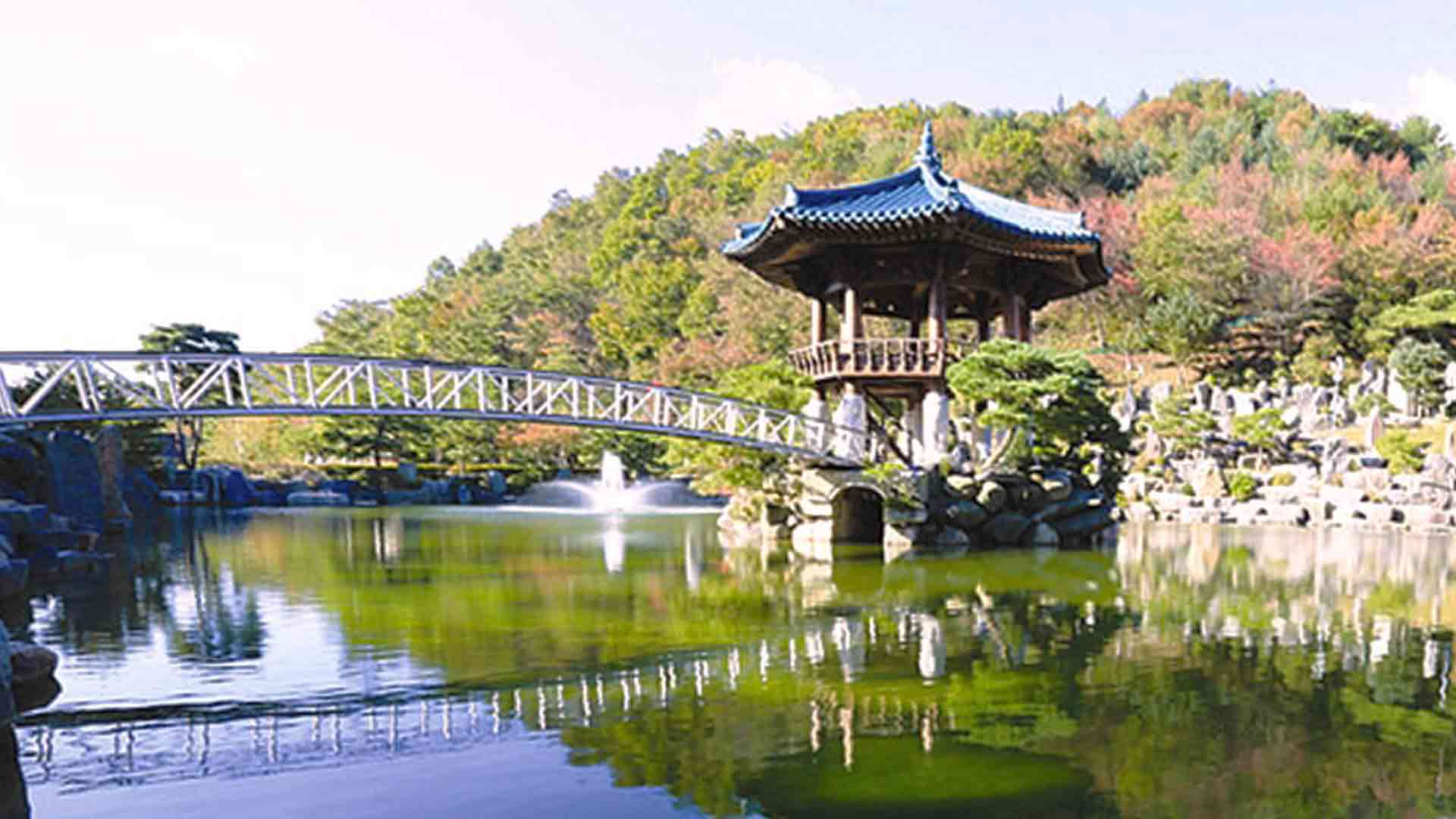 The lake gazebo is 13 m in diameter. It is Korea’s biggest and most beautiful gazebo. Its pillars are 1.5 m thick, and its size is so magnificent that a whopping 100 people sit in it! It is a gazebo that we constructed on a grand scale. You will rarely come across a gazebo like this even if you search the whole world. The lake gazebo has nine stone pillars with animals engraved on them, and eight of them are over an arm span around.

We constructed the lake gazebo so that every part would work harmoniously with one another. The blue tile roof on top makes the lake gazebo a unique and visionary building. It gives off an elegant demeanor while keeping true to Korea’s traditional style of artistry.

On the stone pillars beneath the lake gazebo, we sculpted the animals mentioned in Isaiah chapter 11. The scripture depicts various animals such the lion, eagle, wolf, goat, giraffe, deer, ostrich, peacock, and sheep as people with different personalities, nationalities, and religions that become one and fulfill an ideal world of love and peace.

The origin of the Donggeurae Mountain Gazebo

Initially, we were thinking of placing the gazebo on Donggeurae Mountain in the lake, but at that time, when we were building the gazebo for the lake, the Holy Spirit inspired Pastor Jung Myung Seok to return to Wolmyeongdong. He was out on a regional tour around Korea but returned just before he was about to finish.

When he came and saw the gazebo, he noticed the pillars were too small. So he asked the classical building architect who was in charge about it, “Don’t you think that the pillars are a bit too small?”

“No, I don’t think so. The pillars for gazebos are usually built to be about this thick. In Korea, I’m a famous gazebo expert renowned for building over 15 gazebos.”

“Well, I’ve never built one myself, but I think that the pillars are too small. They are so small that I can’t stand looking at them. Aren’t you the expert? Why didn’t you take the overall size into consideration and make them bigger?”

“Well, I’m not the boss here. How could I have taken that into consideration? If I just simply decide to build the gazebo with pillars that are 50 cm in diameter, do you think that I could build them just like that?”

“But the pillars are too small. It’s not going to work for me.”

“Well, what can I do if you tell me this now in mid-construction?”

After arguing back and forth for a while…

Ultimately, the architect told Pastor Jung that he would burn all of the small logs ordered for the gazebo and leave the next day without receiving payment. Pastor Jung told him that if he did something like that to God’s building, he would be in big trouble, so Pastor Jung asked him to listen and said that they should both accept their faults, have a meal together, and discuss.

The architect told Pastor Jung that it would take more time but that he would build it. In the end, we were able to build them both at a cheap price.

Praying to God for better logs

When we started building the gazebo in the lake again, Pastor Jung prayed to God to give really high quality logs for it. At that time, the architect asked Pastor Jung to go with him to look at the logs, so they went to Naju to look at logs.

When they went there, there were some logs, but the owner of the lumber company said that the good lumber had not come in yet and that if good ones did come in, he would let Pastor Jung know.

At that moment, Pastor Jung asked the owner, “What about those?” pointing at the bigger logs.

Surprised, the owner said, “Are you planning on building a gazebo with logs that big?”

“Then I will give you good ones.”

The owner told him that he had incredibly big timber there. So Pastor Jung said he would take them and signed the contract right away. The classical building architect told him that if he used those big logs to build the gazebo, it would look like a woman with thick legs, so it would not look that great.

The architect said he would do his part and build it but that after he was done, he would not be responsible any longer even if Pastor Jung regretted using such big logs. When Pastor Jung said that he wanted bigger logs than that, the architect laughed.

In the end, Pastor Jung used bigger logs for the lake gazebo. Afterwards, he heard that the timber he got was supposed to go to another company, but the owner made a mistake and gave the best quality timber to Wolmyeongdong instead. Although Douglas Firs are known for producing the best logs, the workers said that they bought better logs than Douglas Firs and that it was really great wood. They were surprised and asked how Pastor Jung was able to buy such great quality wood.

Through this incident, Pastor Jung realized, “God also likes good things! Whenever we give anything to God, we must give the best things.”

This makes sense because the distance from the sports field to the lake is over 50 m. It’s like if you look at a chubby woman from 50 m away. She would look thin.

After building the gazebo according to Pastor Jung’s idea, the expert and all the members confessed, “Even though Pastor Jung has never built a gazebo before, the size fits because he did it while asking God and the Lord.”

Lastly,we made the whole gazebo by peeling, trimming, and assembling everything out of wood. If you look at the rail, you will see that we used nails made from wood rather than iron. If we used iron nails, they would rot the log, so we used nails made of wood.

After we built everything completely, the classical building architect said that he really liked it when he looked at the gazebo from outside the lake. He added that it was the most beautiful gazebo in Korea. Out of all the gazebos he had seen in Korea, he said this was the best masterpiece.

After seeing Pastor Jung, the architect said that he wanted to help. That is how he came to build the gazebo. It was truly Jehovah Jireh. They finished the lake gazebo and the gazebo on Donggeurae Mountain after all these events.