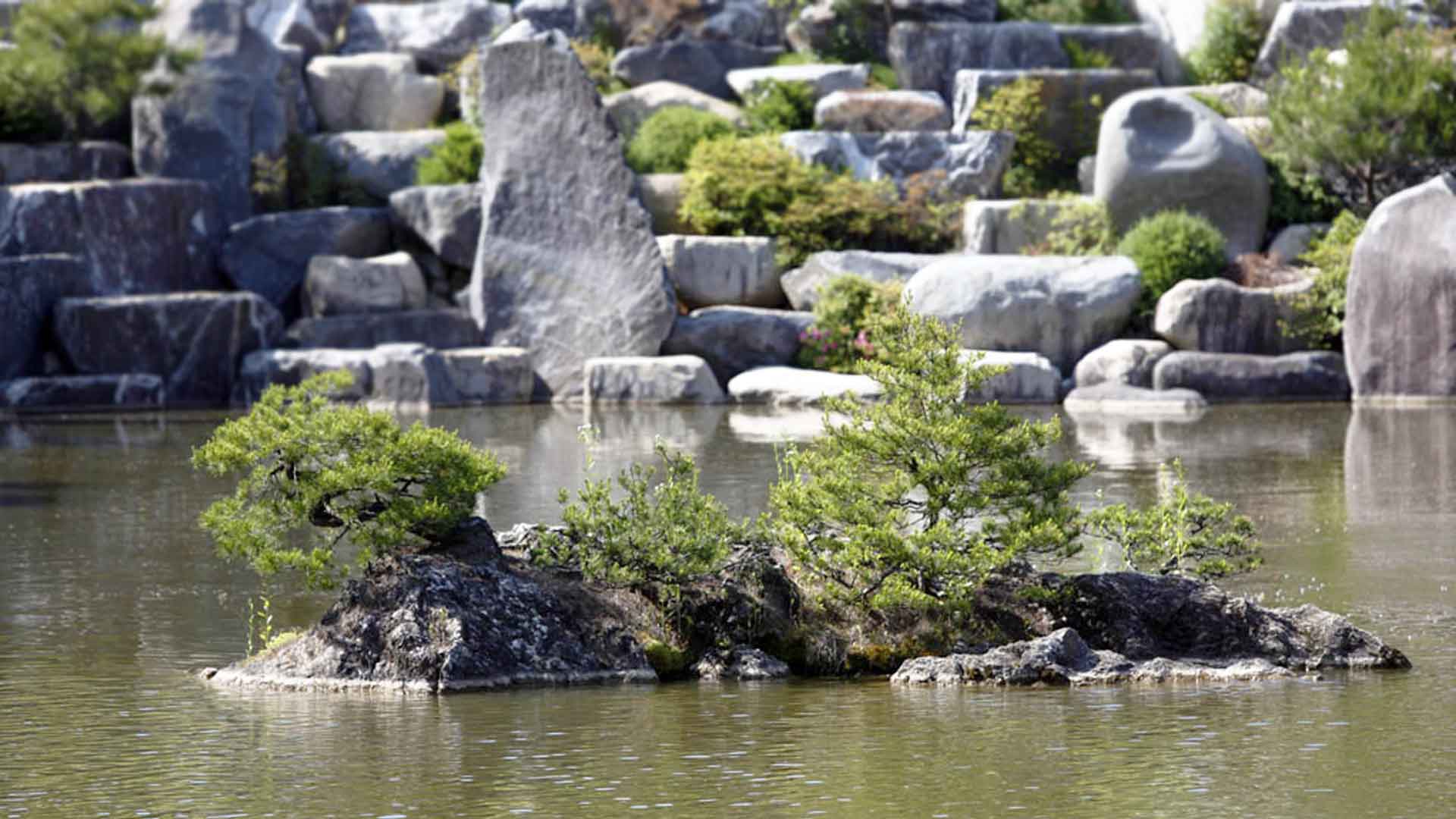 In Wolmyeongdong, we built a beautiful lake. We call it Wolmyeong Lake. In the center of the lake, we built a gazebo, and next to the gazebo, there is a rock island. A bonsai pine tree grows on that rock. Pastor Jung Myung Seok and the other workers found this rock while they were making the lake. So he asked the Lord if they should break the rock or not.
Dirt was covering the rock, and it seemed like it might become a burden later. Jung Myung Seok thought, “If we fill the lake with water and we have rowboats, people might accidentally hit this rock island with rowing.” So it seemed like a good idea to break the rock and get rid of it. It was so obvious that he thought that he didn’t need to ask the Lord about it. Since he had a rock breaking machine with him, he was going to ask the workers to break it. They had been breaking all the other shorter rocks before. It would have only taken fifteen minutes to completely get rid of it. But before breaking the rock, he still asked the Lord, “Should we break this rock?”

Consulting with the Lord

The Lord replied, “Don’t break it.”
But Jung Myung Seok against again, “You told me you would let us row boats in the lake while praising God. If we keep this rock island, it will be in our way when we row.”
In turn, the Lord asked, “Then what do you think we should do?”
So he replied, “I think if the rock is in the way and a wooden boat hits it, the boat will sink.”
But the Lord insisted, “Still, don’t break it. Break the low rocks but leave this one.”
Nevertheless, Jung Myung Seok said, “When we fill the lake with water, the depth will be more than one meter. So most of the rock island will be submerged, and we won’t be able to see much of it. I don’t know how deep you want to make the lake, but the entire rock will easily be covered with water. Don’t you think?”
But the Lord’s reply didn’t change.

The Lord is the owner

In the end, Jung Myung Seok didn’t break it and left the rock intact. But everyone who saw the rock agreed that they should break the rock. Even experts who came in and saw the rock island asked, “Why don’t you break that rock over there. It won’t be visible when you fill the lake with water. People will definitely run into it while swimming or rowing a boat. If you use a breaker, you can easily get rid of it. You should definitely break it.”
At that time, Jung Myung Seok didn’t tell anyone what the Lord said. He simple said, “I want it to look beautiful.”
He worried that they would disagree with the Lord or misunderstand. And he didn’t want them to think that way and commit the sin of upsetting the Lord’s heart. But all of them laughed and said, “It’s going to be under water when you fill up the lake. Lakes a more beautiful the more you fill it up with water.”
Personally, he had thought that the rock would be in the way when people rowed around the lake. And he thought the landscape wouldn’t be pleasant to look at if they filled it with less water in order to make the rock more visible. But despite all that, he concluded that the Lord was the owner of the lake. So it was his duty to follow the Lord’s idea.

The rock island and the floodgate

As time went by and construction continued, the Lord told Pastor Jung, “Adjust the level of water in the lake using the rock island as a reference. When you do, everything will be proportional, and it will look beautiful.”
As a result, the floodgate and the rock island became a pair.
Jung Myung Seok realized everything turned out ideally because he did it in the way the Lord had told him. No one would row a boat into the rock unless they were blind. Plus, rowing a boat between the rocks makes it all the more thrilling. When you look at the rock island from the gazebo, it looks like an island in the ocean. And since there’s even a tree on it, it kind of looks like Korea’s Dok-do Island.

Consult with the Trinity who know

In this way, Jung Myung Seok taught us that we must do things after consulting the Lord. Nowadays, people ask how we built this lake, and how we got that rock there. They even ask if it is a natural island.
If Jung Myung Seok had not consulted with the Lord, then he would have broken the rock. And destiny would have changed. Truly, the Trinity in heaven know all things, and They listen as we speak. If you listen, you can feel and hear Their answers in our mind and in our hearts.