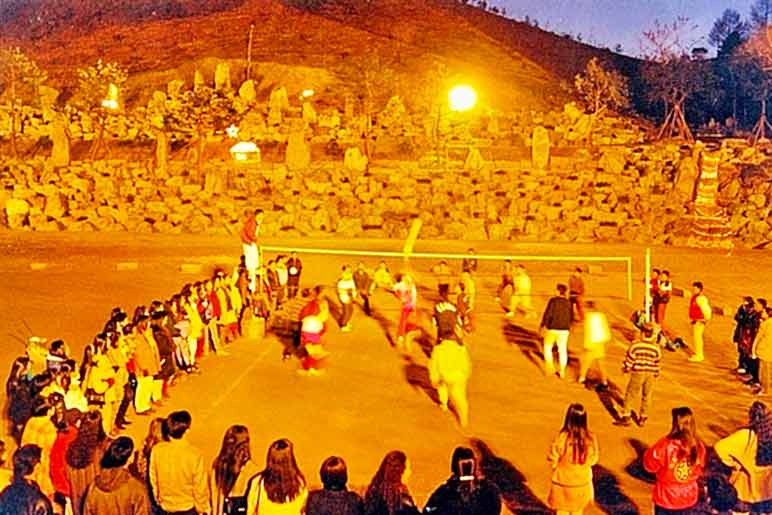 If I had started to build Wolmyeongdong now, I wouldn’t be able to do it.

Twenty five years ago, when we were buying the land in Wolmyeongdong and developing it, the sun of my life was shining at its peak. That is why I was able to make it at that time.

Everyone, think about yourselves, too. If the sun is setting in the western hills but your mother asks, “Do you want to go to a distant valley to relax and have fun? I’ll pack some sushi and prepare juicy meat with beef tenderloins,” then you will say, “The sun is setting. Where can we go? It’s better to just eat at home.”

In this way, if I were to be asked to develop Wolmyeongdong now, I wouldn’t be able to because it would be too late.

That is why the Holy Son Lord told me back in the days when we were building the rock landscape, “During the process, ask them to bring rice and eat them together, ask them to cook noodles as well and eat them together, and sing as one while developing Wolmyeongdong. You must use it while you are in the process of developing it. Once you are finished with the construction, you will not be able to use it because you will have to move on to another project at that time.”

I finished building the Wolmyeongdong rock landscape in December 1998 and held one final event, but I couldn’t rest even one day afterwards.

Originally, I was planning on having a huge celebration to reward everyone for their hard work and rest for a month after finishing the rock landscape, but ultimately, I ended up not being able to rest at all.

While I was setting up the boulders, the Lord asked me, “Why are you in such a hurry? Why are you so occupied with only setting up the rocks? When I see your eyes, they are bloodshot from only looking at the rocks all day. If you are that way, all the workers will feel lost. The young ones are working while losing strength, so you should eat, drink, sing, and give them counseling while setting up the rocks.”

He told me this so many times that I began to consider what He said to a certain degree.

During the process of working, I began to eat with people, counsel people, preach the Word, and meet newcomers. At that time, while building the rock landscape, we also played soccer on one side of the sports field. We thought we would be able to play soccer there after we completed the development of Wolmyeongdong, but we had already done everything during the process.

After going to Europe, I did ministry through soccer.

In this way, as we are doing the work we need to do in the world, we should eat and enjoy the merits of our actions as rewards during our lifetime on the earth. Then we will be able to receive and enjoy rest after going to Heaven.

In the past, I worked and ran really diligently and passionately. I cherished each day of my youth and ran while endeavoring with all my effort. Even now, I am so busy, but compared to the past, I am actually resting a tiny bit here.

To all the youths who have ears, arise and run shining your light according to today’s message. Your light will shine brighter as much as you run.