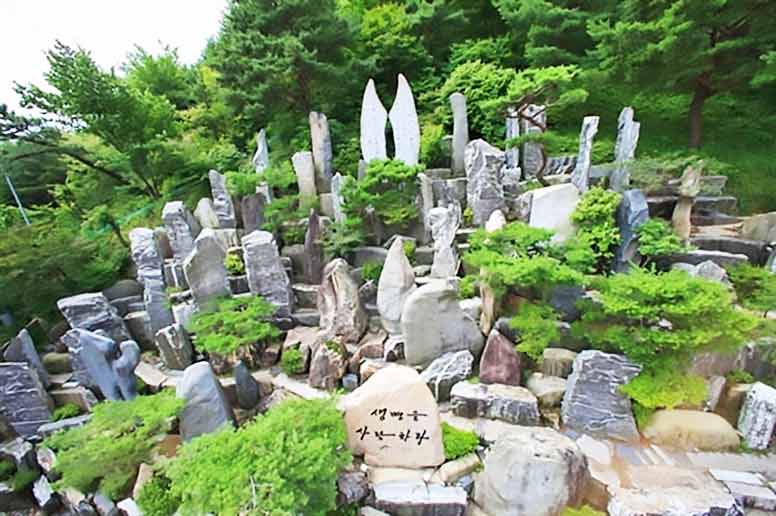 When we first began setting up the rocks in Wolmyeongdong, I called in rock landscape experts to help out, and I told them, “Please set up the rocks in an astonishing way.”

The experts replied, “We don’t know what you mean.” They had no idea how to make it look astonishing so they asked me, “How would you set up the rocks in an astonishing way?”

I answered, “I don’t know either because I’ve never done any landscaping with rocks before. God and the Lord told me that when you, the experts come, I should ask you to build the rocks in a beautiful, astonishing, and majestic way.”

The architects replied, “When we place rocks on top of each other, they will look like this.”

At that moment, the Holy Son chuckled and said to me, “They don’t know how to build it in an astonishing way. Let’s just send them home.”

But since I had already called them, I couldn’t just let them be idle. I was kind of in an awkward dilemma, but at that time, the Holy Son made the rain fall continuously. As a result, the experts were not able to do anything. They simply returned without being able to do any work.

Then the Holy Son made me erect a 2-meter long rock when I planted it in the ground so that it would stand up. At that moment, the words, “Wow! This is awesome! Can rocks be erected like this?” came out of my mouth. I continued, “It will be even more astonishing and awesome if we find and erect longer and bigger rocks!”

So we found and brought 70 to 80 rocks that were long and big, and we renovated the landscape by setting them upright. When we did, the rocks looked majestic as well as astonishing at the same time.

Actually, the rocks crumbled not four times but five times. On our first attempt, we built it with limestone, but during the winter, the limestone shattered into pieces because the water they absorbed froze. So we took them all out and rebuilt the rock landscape.

On our second attempt, we brought in marble slabs and set them up, but they were too heavy and would fall if they were leaning even a little bit in a particular direction. The marble slabs were also not that intriguing so we got rid of them.

Later on, during our third attempt, we developed the landscape with tiger-fur-patterned rocks. These rocks were good so we tried to continue to use them, but the landscape crumbled an additional three times.

Rock landscaping can be done by anyone if the rocks are lain on their side. Even elementary school students can do it. If workers are told, “Lay the rocks on the ground,” they would easily lay them down and leave, but setting rocks upright is a different story. It would be difficult even for a king to do it.

If you set rocks by laying them, you can easily set up to 120 rocks per day, but if you set rocks by erecting them, you cannot set up as many within a single day. When I developed the Ambition Masterpiece in Wolmyeongdong by setting the rocks upright, I was barely able to set three of four rocks per day. As for big boulders, I would at most be able to set up two in a day.

Now you know why Wolmyeongdong is astonishing, right? You must deliver the Word knowing the essence correctly. Then you words will have authority and power, and you will not be pushed or be defeated by baseless theories.

This is also how it is when you preach the Word of the time period.

You have to know the fundamentals and explain the concepts and logic clearly. Then you will not be pushed or defeated by those who oppose. Instead, you will display the power and authority of the Word, and miracles will happen.