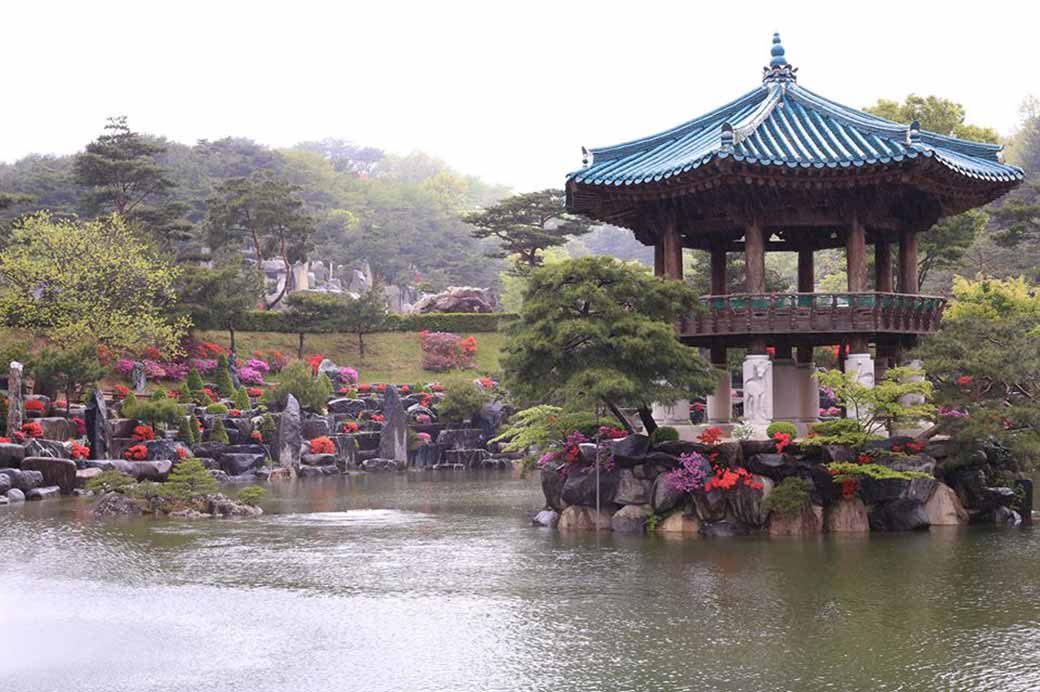 The Wolmyeongdong Natural Temple has been developed with beauty, majestic, and wonder in mind. However, in the past, it was nothing but a tiny village in the mountain.

Wolmyeongdong is a mountainous region, so in the past, there was only a small amount of space for rice paddies and fields. So, it was difficult to farm, and since it was surrounded all over by mountains, if you took even one step in any direction, you would already be on a mountain. It was so cramped that it was difficult to live there. In contrast, Seokmak-ri, the region below Wolmyeongdong, was a flatland, so it was great for farming.

Seokmak-ri was such a great place that Wolmyeongdong couldn’t even begin to be compared with it. However, ever since my disciples and I developed Wolmyeongdong, the situation has completely changed.

Now Wolmyeongdong has become such a precious land that cannot be compared with the flatland, Seomak-ri. Hiking trails were created, and the mountain was developed to have walking trails and gardens as well. All of the surroundings were developed and made into what is called the Natural Temple today.

In this way, for individuals too, if you develop and improve yourself following the changes in the times, you will transform in a better way as much as it was disadvantageous for you. That is why you have to make yourself as much as the time period has changed.

When developing Wolmyeongdong, if we had developed it without any design in mind, we would have ruined this masterpiece. However, I left the mountains as it was without forcibly changing it and developed it according to God’s design.

This applies to people as well. If you forcibly change a person without thinking about their own unique traits, you will ruin an artwork of life.

If individuals develop and raise their level, their destiny and situation will completely change and become different. Therefore, I hope you will live your life making and developing yourself in order to  raise your level.

– Based on Pastor Jung Myeong Seok’s morning message on October 30, 2014