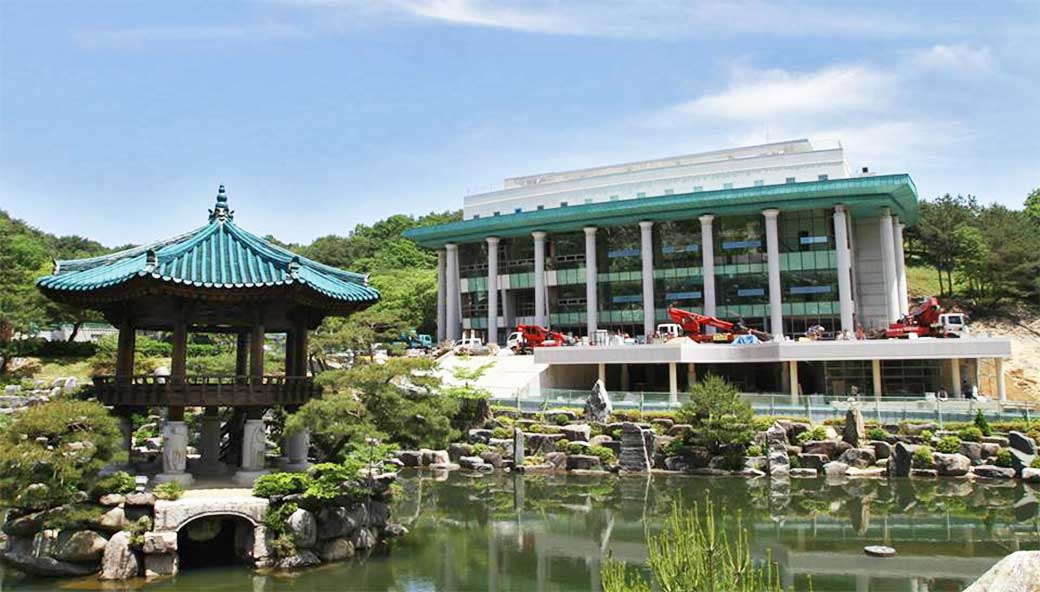 I remembered that the summer retreat that was held in Wolmyeongdong in 2010 was held during a time when the rain was pouring. At that time, I promised, “I will have a building constructed so that you will not get anymore.” As I continued praying, the Holy Son told me, “You must do as you promised. It was a promise I made as well.”

Following the Holy Son’s inspiration, we worked on the design of the Holy Son’s House of Love and launched its construction in full force. At that time, after praying, I said, “Design it again in a way that an assembly hall can be included and then show me again.”

Two months later, the new blueprint arrived. After looking at it and praying, I thought that it was still lacking. As I continued to offer deep prayers to the Holy Son, I clearly heard a voice that said, “As it is being made from the very beginning, make it beautiful, intriguing, and wondrous.”

So I added more than 12 pillars to the design, each at least two armfuls wide.

I also made sure there was a cafeteria on the first floor, a place for an art gallery and shops on the second floor, and a meeting place where more than 1200 people could fit on the third and fourth floors.

After about six months, the design was polished and the Holy Son approved it. So I said, “Let’s build it!”

With that, with the help of the various departments from the college students to the family members, the construction was launched in full force.

The Holy Son certainly carries things out as He has spoken.

In September of last year, I said, “Colder days will come in the winter, and it will snow a lot as well. So let’s not hold the Rock Festival this year. Instead, let’s set up boulders around the sports field and press on with the construction of the building.”

So we pushed forward with the construction until the winter came. We did it like that because Wolmyeongdong construction is absolutely, absolutely not allowed when it is cold. We resume when the weather becomes warmer.

In the end, this is how we came to build the Holy Son’s House of Love to be as beautiful, grand, and wondrous as it is today. Now that the construction has finished, even if no one introduces it, everyone who sees it will say, “Wow, that building is so beautiful, majestic, and wondrous!”

Even if you may think that the work you are doing is done by you alone, there are always people who are contributing behind the scenes. Those people may not even be able to talk about what they are doing. They simply record history and move on.

Since the Holy Son positions each person in the appropriate place according to their talents, when you work, each of you should do things in various areas as much as your abilities allow. This is the last key point of today’s message, which you should always reflect on as you live your life.

~Excerpt from the Wednesday message on February 13, 2013 by Pastor Jung Myung Seok

2 thoughts on “Do Things as Much as Your Abilities Allow”