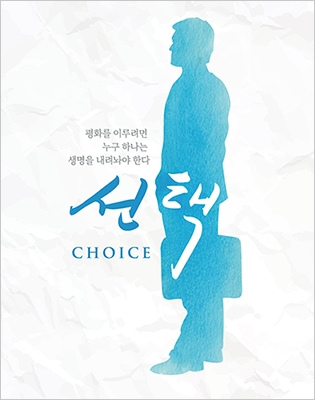 “Human being’s endless greed and fighting and the tears of the Holy Son who is looking upon the earth overflowing with killing and murder… The Holy Son has no choice but to make the heart-aching decision to send the one whom He loves like His own life in order to stop all wars and fulfill a world of peace. Yet, there is one more decision that has to be made on the verge of death. To fulfill peace, somebody has to put down their life.” ~ Synopsis of the musical Decision

The musical Decision ran for two days and ended on May 15th for Teacher’s Day. It was about Sergeant Jung Myeong Seok who participated in the Vietnam War as a member of the Baengma (White Horse) Guerrilla Unit in 1966. While witnessing and experiencing the tragic devastation of the war, he keenly realized the value of life.

This musical was sponsored by the Wolmyeongdong and Keumsan community and was produced to commemorate Teacher’s Day. ‘Decision’ was performed at the Holy Son’s House of Love in Wolmyeongdong. It drew a large crowd of more than 1,500, including viewers from Taiwan and Japan. It ended in great success.

Brief Summary of the Creative Musical

Pastor Jung Myung Seok was dispatched to Vietnam as a member of the Baengma Guerrilla Unit from 1966 to 1969, and during the war, he deeply thought about the matter of life and death, the fundamental issue of human beings

After realizing the terror of war, Sergeant Jung tells the Holy Son his decision to return to the Vietnam War. He wanted to return to save as many lives as possible.

This play is based on the true story of Pastor Jung Myung Seok. He delivered a message about what he realized when he was dispatched to the Vietnam War. In the message, he said, “I was dispatched to Vietnam. It was horrendous, and I was put in dangerous situations where my life was constantly threatened. Even in that situation, I read the Bible again and again without ever letting it go from my hands. The Lord made me realize that one life is so precious, that it cannot be traded with the world. Through participating in the Vietnam War, I realized that peace cannot be achieved with guns and knives. It can be acquired without them. Right next to me, the Lord always enlightened me with great realizations. He said, ‘They are enemies to you but not to Me,’ and taught me how to love my enemies.”

During the scene where the Holy Son’s earnest love for humanity was displayed, the whole audience realized about Heaven’s love. They realized the value of life and shed tears.

Sergeant Jung and a Viet Cong were pointing guns at each other, but the sergeant threw away his gun. He ran to the Viet Cong, hugged him, and cried.

The Director, Kim Kyung-tae, said, “I worried thinking for a long time, ‘How can I render the war scene that takes up almost three quarters of the show on the stage?’  Furthermore, the actors starring in the play never experienced war before, so they were not able to understand the reality of it. Most of the actors were young people who did not even know about the military, so it was difficult to direct the play. In addition, what Pastor Jung Myung Seok went through in the Vietnam War was real, but it was difficult to understand his heart and the situation where he put his life aside and embraced the enemy in order to fulfill peace. I’ve directed and seen a lot of works but not one with this kind of story. It was the first time for me, so I wanted to produce it well.”

In addition, he said, “Out of all the scenes- the dramatic scenes between Sergeant Jung and the Holy Son who is invisible but has to be shown, the scene of the sergeant risking himself for a fellow soldier who was dying, and the scene of him approaching a Viet Cong and crying holding him in his embrace after a situation where they were pointing guns at each other… I think the last scene may forever be left as an unfinished project. This was a precious time for me to understand the world that is like a battlefield.”