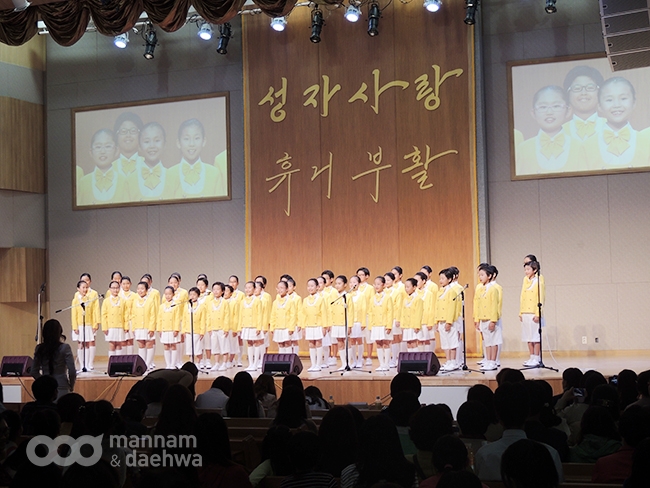 The Fourth Galaxy Festival of Art and Praise

The Christian Gospel Mission dedicates the whole month of October to giving glory to God. With the help of the Wolmyeongdong Recreation Center, they held their fourth Galaxy Festival of Art and Praise. They held the festival in the Holy Son’s House of Love in Wolmyeongdong on the 18th.

Five hundred children from all over Korea participated and sincerely glorified God. It was impressive because they did so while following instructions well. As a result, the whole event flowed smoothly.

The children did not only sing beautiful praise songs to God. They also gave glory while dancing, cheering, and doing a variety of other performing arts. The Christian Gospel Mission ran the event in the form of a competition. So in the end, there was an awards ceremony.

Children give Glory to God by singing and dancing

One of the event staffers said, “In the process of preparing for this festival of art and praise, I felt like the children, teachers, and parents received grace and inspiration and were transformed as a result. For those who felt like their church atmosphere was not stimulating enough because their region was small, I think this festival became a positive stimulant for them. Everyone became more determined to glorify Heaven for the rest of their lives.”

Although not every team won an award, we believe the Trinity saw every child who participated in giving glory on stage as the highlight of the show. It was so beautiful to the point we could glimpse what it would be like for these little angels to sing in Heaven.