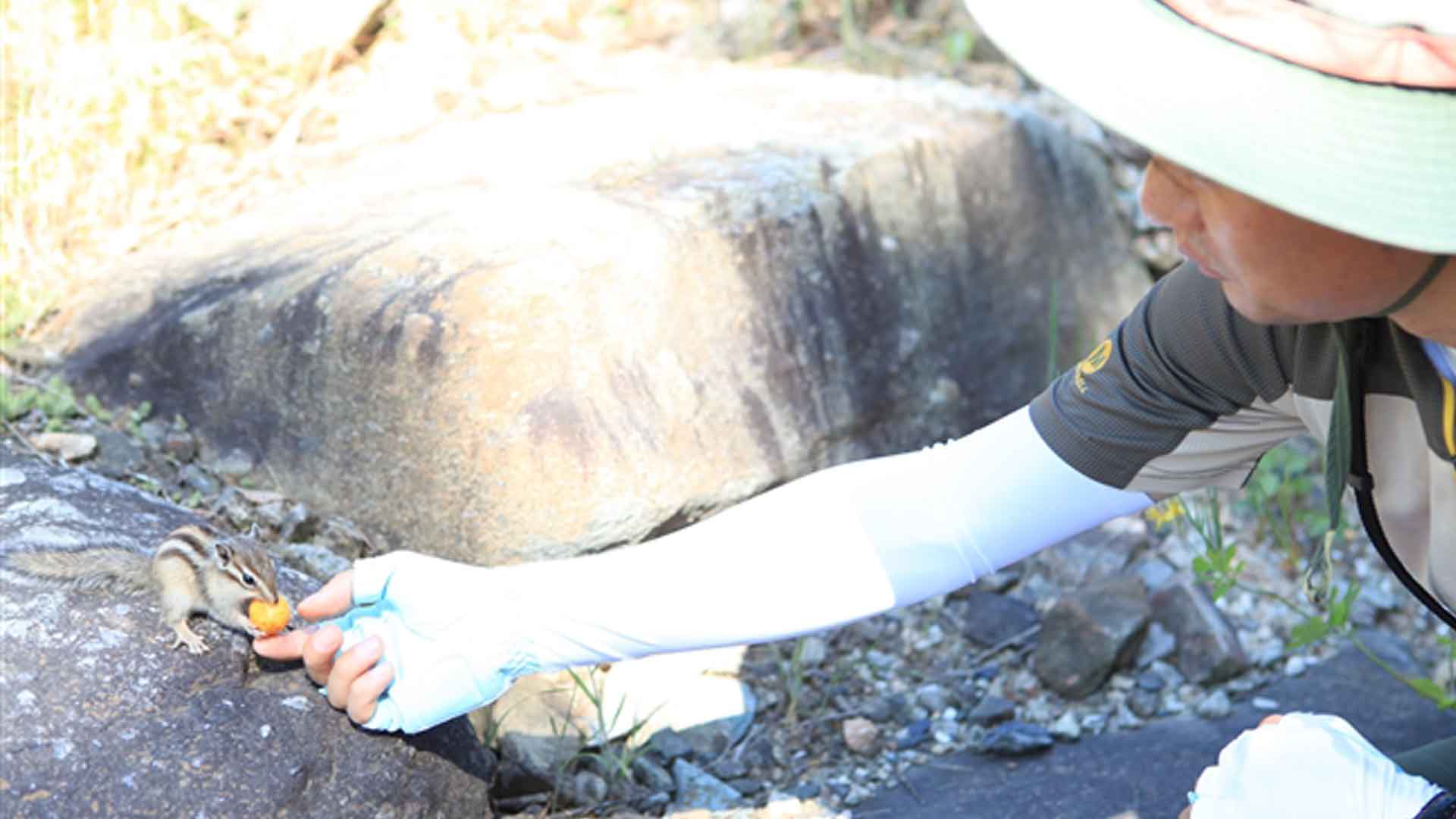 Hey everyone! I recently saw some squirrels in Wolmyeongdong. Aren't they so cute?!

A curious squirrel that crawled up to my camera!

But did you know that originally, squirrels didn’t live in Wolmyeongdong?

Pastor Jung Myung Seok had to lure them to Wolmyeongdong with food, which is a part of why they're so bold.

How Pastor Jung lured the squirrels to Wolmyeongdong

When Pastor Jung was a teenager, he noticed some squirrels while going back and forth from his house to Seokmak Church. At that time, squirrels lived only around Seokmak Village. They rarely came to Wolmyeongdong.

So he studied about how to lure in the squirrels. He thought, “Why don’t the squirrels come to Wolmyeongdong. We also have chestnuts and acorns that they love. How can I make those pretty squirrel live in Wolmyeongdong?” and chased after the squirrels, which were really hard to catch.

But one day, he finally caught one.

He put the squirrel he caught at the foot of a chestnut tree in Wolmyeongdong. However, the squirrel left soon after. Even though there was so much food it could eat, it still left.

So Pastor Jung thought about it again.

Ultimately, he discovered a way to domesticate the squirrels. After he caught another squirrel, he gave it a wheel to run in, fed it beans, which squirrels love, and raised it for three years inside a cage. During that time, he let it grow familiar with his face.

His father saw what he was doing and said, “It eats six liters of beans a year. Why are you raising that? Will it give you money? You should eat those beans for yourself instead,” and did not let him raise the squirrel.

So from then on, he picked up acorns and fed them to the squirrel instead.

His father asked, “Why are you still raising a squirrel?”

Pastor Jung replied, “I am raising it so it will live in our house.”

His father said, “A squirrel is a type of rodent. Even if you raise it, in the autumn when we spread the rat poison, it will eat that and die.”

So he told his father, “A squirrel does not eat what rats eat. So it will not die.”

His father said, “Raise pigs or chicks as a hobby instead. If you do that, you can at least eat them when they are fully grown.”

Despite his father's persistence, Pastor Jung raised the squirrel no matter what and continually trained it.

He took it out of the cage, let it exercise, and also showed his face to it so the squirrel would recognize his face.

Whenever he did that, the squirrel looked at him as if to say, “You are handsome like me.”

Then one day, Pastor Jung told the squirrel, “I’m going to let you loose around here. So please don’t run away. I promise to make sure to bring you food even in winter.”

With an anxious heart, he tied a string to its foot and brought it outside to see how things would go.

The squirrel simply crawled around and ate only what he fed it.

So he made the string longer and kept training it for awhile. Then one day, he let it loose.

When he did that, it ran away to another place.

However, because there was no food, it returned to where Pastor Jung used to feed it.

He thought it was so cute that he gave it some acorns and beans. The squirrel took them, put them away, and left again.

But it'd come back frequently to look for food.

Whenever the squirrel would come back, Pastor Jung held it in his hands, played with it, and gave it food.

When the weather got cold, out of nowhere, it brought its family along.

It dug a burrow nearby, and started to live there. Ultimately, Wolmyeongdong became a valley of squirrels.

What God has given us

Later on, Pastor Jung spent several years reading the Bible and praying in the mountains.

At that time, while other people ate the apples and fruits that they bought with money, he picked up and ate chestnuts to fill his stomach before the squirrels ate them. He was like a human squirrel.

Later, he found out that chestnuts were really good for the body. God blessed him with good health by changing his circumstances without saying anything. But because Pastor Jung didn't know, he complained and grumbled until he realized God's working.

In this way, I hope that you too will think about what you have received and consider how precious those things may be. You will probably discover things you have taken for granted and things that are more precious than what you originally thought.