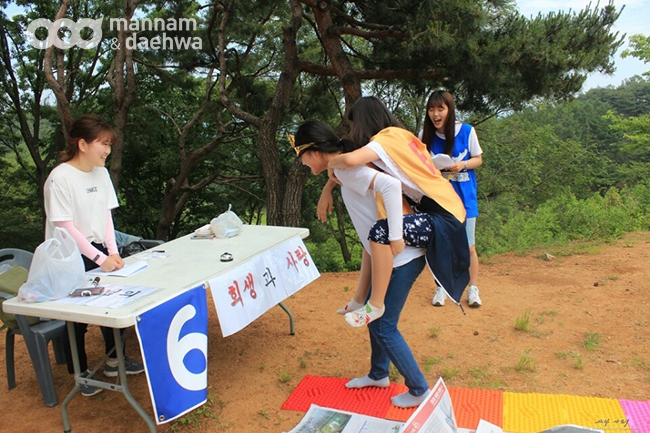 WMD News — Wolmyeongdong hosts a sports festival for the second time this year on May 28. Middle school and high school students from different provinces in Korea gathered in Wolmyeongdong. These students were all affiliated with a church. In total, 2,400 youths joined the event, and among them, 200 recently started attending church. Since the first sports festival was a hit, many people were eager to come back again even though the sun was blazing.

▲ Students complete missions at the various designated places in Wolmyeongdong

The Wolmyeongdong Recreation Center established booths around Wolmyeongdong for the sports festival. They wanted people to enjoy the sight of God’s creation as participants went from one place to another. After completing a mission at a post, participants gained a star-shaped sticker. The theme of the event was “meeting the Holy Trinity throughout the many places of Wolmyeongdong.” In the opening message, Pastor Jung Myung Seok emphasized this point. So many youths who attended the event said they were able to feel God through nature.

The missions in the sports field involved more dynamic movement where people had to move their bodies more. While on the other hand, the missions further away from the sports field let people enjoy the sights of nature in peace. In particular, the missions along the walking trails were related to faith. That is why participants said they were able to meet the Holy Trinity at a deeper level.

For the youth, living a life of faith can be difficult. So it was a breath of fresh air to see how the Recreation Center designed the missions for them to approach faith in a fun and interesting way. In one mission, participants read poems Pastor Jung Myung Seok dedicated to the Holy Trinity. After reading the poem, they had to try writing their own poem to God. This taught them how literature is also related to one’s faith. In total, there were 36 different activities.

For lunch, parents volunteered to make homemade hamburgers and other dishes for people to enjoy. The homemade hamburgers in particular made a comeback from the first sports festival. They were tremendously popular and delicious. Pastor Jung Myung Seok also prepared a variety of snacks for participants to express his support for the youth to grow well in faith.

After all the sports festival ended, the participants gathered in the Holy Son’s House of Love to watch Provice’s 11th showcase. The fiery praise offered to the Holy Trinity and moving performances invoked a strong response from the audience. Some teens even shed tears. The performances included a variety of songs. Some songs were slow and touching while others were upbeat. The performances highlighted the harmony of faith and songs.

After the Provice 11th Showcase ended, one teen said, “I thought faith was something rigid and old-fashioned, something that had nothing to do with me. I didn’t expect to have many friends who would live their life of faith in such a fun way. For once, I am considering whether I should have more interest in God.”

Another student expressed his thoughts saying, “This is the first even that has made me think of God through His amazing creation. I’m going home after feeling a lot about God, so I’m grateful.”

The Wolmyeongdong Recreation Center hopes many people will love the Holy Trinity in their daily lives following after the ideology of the Christian Gospel Mission: A life of faith is something you should do in your daily life. Faith is not a far cry from life. This event highlighted the Word and mind of Pastor Jung Myung Seok. One of his mottoes is that one has to meet and love the Holy Trinity within their lifetime.

– Pictures all provided by Mannam&Daehwa