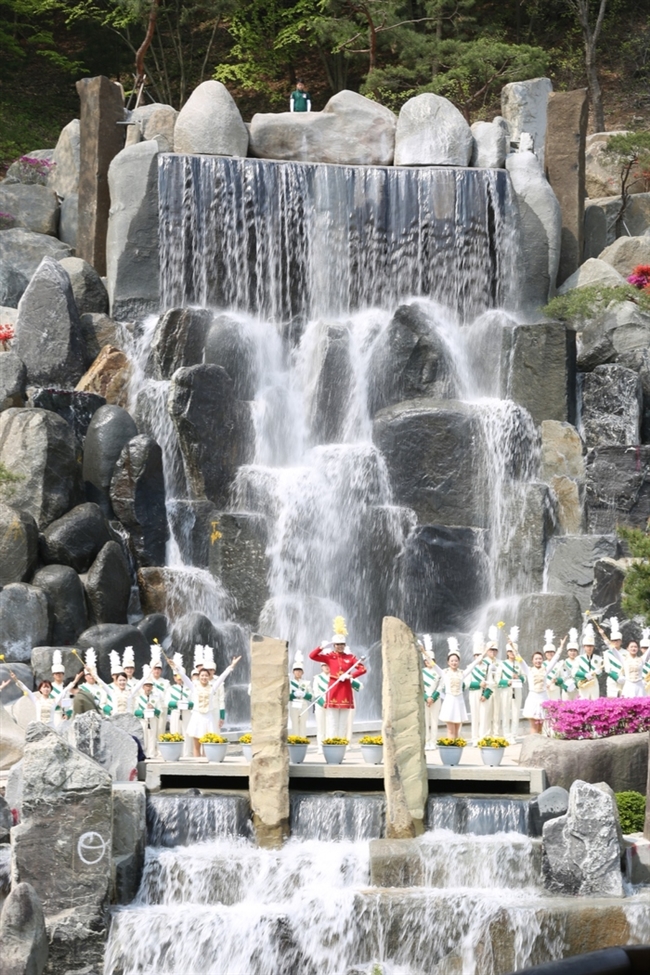 The Flower Festival in Wolmyeongdong

During the Flower Festival, President Jeong Myeong Seok stated, “Let’s brighten the dark and tough world with the Lord’s Word and His mentality!”

The beautiful spring flowers welcomed those who participated in the Myeong Flower Festival. The wind moved the flowers in rhythm. The sounds of fanfare spread throughout the Natural Temple. The Christian Gospel Mission hosted the 2016 Myeong Flower Festival between April 30 to May 8. The festival lasted 9 days. A crowd of 22,000 enjoyed the event. Wolmyeongdong hosts a flower festival every spring.

The theme of the flower festival was- “Brightening the dark and tough world with the Lord’s Word and mentality.”

The sounds of fanfare spread throughout Wolmyeongdong, the Natural Temple, marking the beginning of the festival.

The Director of the Wolmyeongdong recreation center, Pastor Jeong Beom Seok, spoke at the opening ceremony. “Our purpose for living is for our Creator. It is for Him that we live. A flower must have its fragrance. In the same way, let us believers become people who spread the Lord’s fragrance and love.”

This year’s Myeong Flower Festival was different from previous festivals because it included the residents of Geumsan. They came to the spring picnic held on May 4th. Also, there were events on May 7th that members could enjoy with their parents.

On May 4th, CGM invited the local residents as special guests to the festival. They were from the same birthplace and hometown as President Jeong Myeong Seok. He is the founder of CGM and an international religious leader. Since they came, CGM commemorated their hard work as people who have lived protecting their homeland.

Also, the local residents spent their time pleasantly watching performing arts and enjoying the lunch that CGM had prepared for them.  They walked around the Natural Temple taking in the beautiful scenery.

CGM invited the local residents from where President Jeong Myeong Seok, the founder of CGM, was born and raised in order to commemorate them as special guests who have endeavoured to protect their homeland.

A Day Spent with Joy

On May 7th, one day before Parent’s Day in Korea, members of CGM brought their parents to the festival. While walking around, they delighted in seeing the spring flowers that had bloomed in the lush fields, and they also enjoyed the art performances. Additionally, some ate the lunch that CGM had prepared, while others who had brought their own lunches enjoyed them outdoors and formed unforgettable memories with their parents.

Jang Myeong Bok, the mother of CGM member, Kim Hyun Ja, pointed to the waterfall across the Wolmyeong Lake and exclaimed, “I like that waterfall the most.”

Also, Kwon Chun Ja, who had come to the festival with her daughter, Keum Young Sook, and her son-in-law, Park Jong Il, remarked, “I noticed how much effort was required to develop this place.”

Furthermore, while smiling brightly, Kim Jung Hae, who had accompanied her granddaughter, Kim Hae In, to the festival expressed, “It felt great coming here, and because God made this place in this manner, I was able to spend the day in joy.”

Members of CGM participate in the festival with their parents and attach carnations of love on their parents’ shirts.

Moreover, Pastor Joo Eun Hae of CGM said in her speech, “It is truly precious to have come here when God called you through a person. The Holy Trinity have placed a spiritual badge on your chest.”

The Flower Festival Overflowing with the Fragrance of Love

During the festival, CGM held an exhibition of illustrated poetry, displayed proverbs, held performances, and hosted a variety of other programs. In addition, the fragrance of the flowers that symbolize the beloved ones, and the human flowers together with their parents, filled the Natural Temple. The festival of joy and the praising of God continued for 9 days.

God declared in the Bible that He has set eternity in the hearts of man. Ultimately, this year’s Myeong Flower Festival was an event that overflowed with the fragrance of love from believers who were able to realize the noble providence of divinity and who were able to steadily go towards the eternal world of Heaven, along with all who were invited to that world.